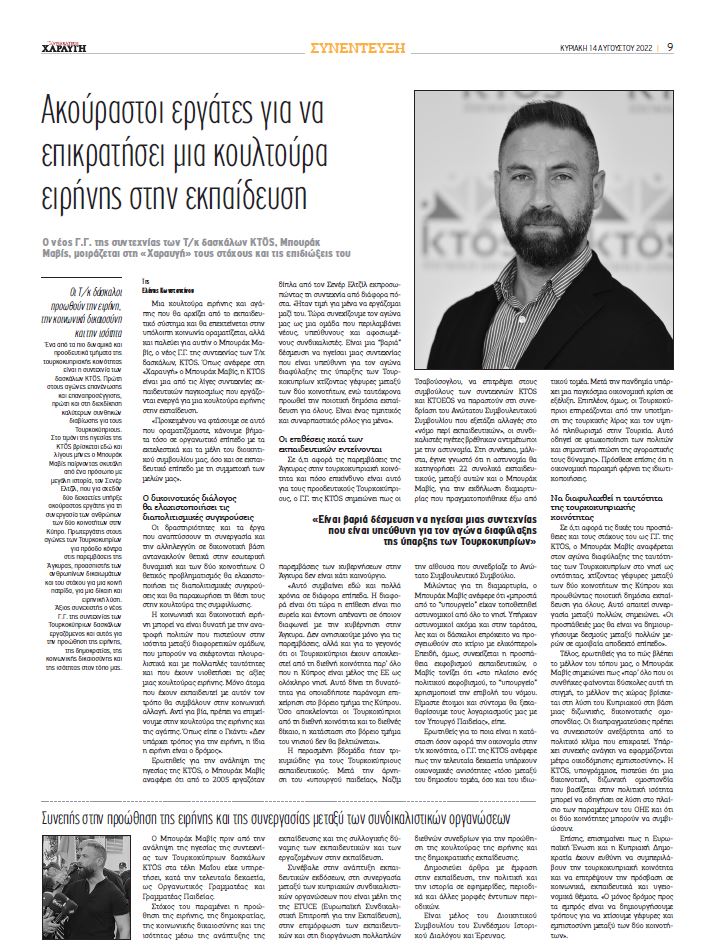 Eleni Konstantinou from Haravgi Newspaper – a newspaper published in Greek – held an interview with KTÖS General Secretary Burak Mavis. Mr. Mavis shared his vision on Cyprus politics, unionism, education and education for a culture of peace with Ms. Konstantinou. You can find the full interview below and you can visit the link https://dialogos.com.cy/gg-ktos-sti-ch-akoyrastoi-ergates-na-epikratisei-ia-koyltoyra/  to read the interview in Greek language.

KTÖS General Secretary Burak Mavis: “In order to achieve what we envision, we are taking steps both at the organizational level with our executive and board members, and at the educational level with the participation of our members.” 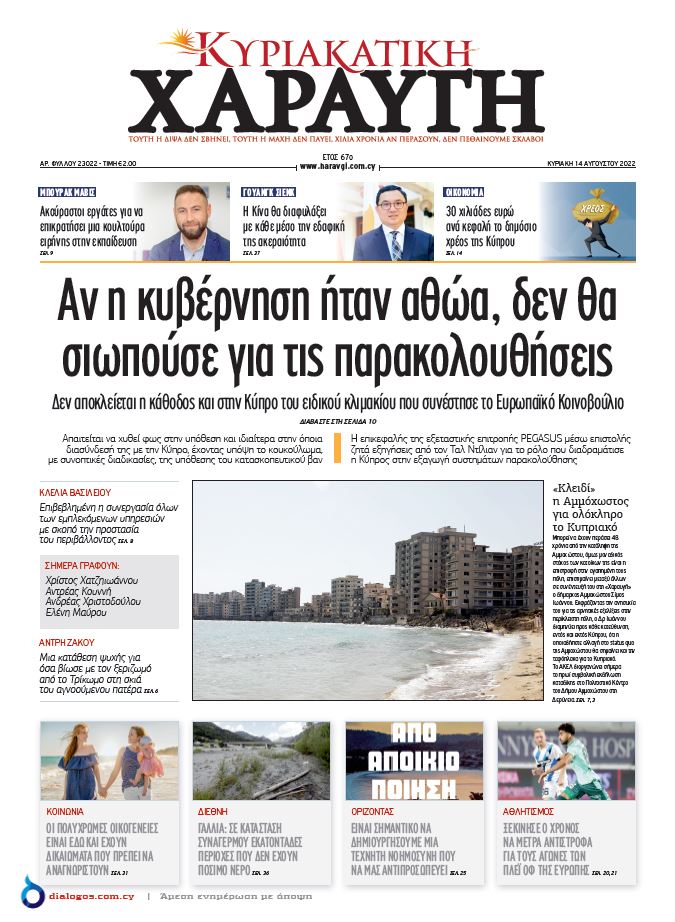 A culture of peace and love that will start from the educational system and expand to the rest of society is envisioned, but also fought for by Burak Mavis, the new GS of the Turkish teachers’ union, KTÖS. As Burak Mavis reported in ” Haravgi “, KTÖS is one of the few teacher unions worldwide that actively work for a culture of peace in education.

Activities and projects that develop cooperation and solidarity on a bi-community basis reflect positively on the internal dynamics of both communities. Positive problematization will minimize intercultural conflicts and give way to the culture of reconciliation.

Social and inter-communal peace can be possible by raising citizens who believe in equality between different groups, who can think pluralistically and with multiple identities and who have adopted the values ​​of a culture of peace. Only people trained in this way will contribute to social change. Instead of violence, we must insist on the culture of peace and love. As Gandhi said: “There is no way to peace, peace itself is the way.”

Asked about assuming the leadership of KTÖS, Burak Mavis says that since 2005 he has been working alongside Sener Elcil representing the guild in various positions. “It was an honor for me to work with him. Now we continue our fight as a group that includes young, responsible and dedicated trade unionists. It is a “heavy” commitment to lead a guild that is responsible for the struggle to preserve the existence of Turkish Cypriots by building bridges between the two communities, while at the same time promoting quality public education for all. It’s an honorable and exciting role for me.”

Attacks against teachers are intensifying

“This has been happening for many years at various levels. The difference is that now the attack is more widespread and intense against anyone who disagrees with the government in Ankara. We are not only concerned about the interventions, but also about the fact that the Turkish Cypriots have been excluded from the international community even though Cyprus is a member of the EU as a whole island. This gives the possibility for any illegal business in the northern part of Cyprus. As long as the Turkish Cypriots are excluded from the international community and international law, the situation in the northern part of the island will not improve”.

Last week was a stormy one for Turkish Cypriot teachers. After the “minister of education”, Nazim Çavuşoğlu, refused to allow the councilors of the KTÖS and KTOEÖS unions to attend the meeting of the Supreme Consultative Council considering changes to the “law on teachers”, the union leaders were confronted by the police. Then, indeed, it became known that the police will charge a total of 22 teachers, among them Burak Mavis, for the demonstration that took place outside the room where the Supreme Advisory Council was meeting.

Speaking about the protest, Burak Mavis said that “in front of the “ministry” there were police officers from all over the island. There were police even on the roof, as if the teachers were going to land on the building by helicopter!” Because, however, the attempt to intimidate teachers continues, Mavis emphasizes that “in the context of political intimidation, the “ministry” uses law enforcement. We are ready and we will soon settle our accounts with the Minister of Education”, he said.

Asked what the situation is regarding the economy in the Turkish community, GS of KTÖS stated that in the last decade there are economic inequalities “both between the public sector and the private sector. After the pandemic there is a global economic crisis in progress. In addition, however, Turkish Cypriots are affected by the devaluation of the Turkish lira and high inflation in Turkey . This leads to the impoverishment of citizens and a significant drop in their purchasing power”. He also added that economic decline brings privatization.

To preserve the identity of the Turkish Cypriot community

Regarding his own efforts and goals as GS of KTÖS, Burak Mavis refers to the struggle to preserve the identity of the Turkish Cypriots on the island as an entity, building bridges between the two communities of Cyprus and promoting quality public education for all. This requires collaboration among many, he notes. “Our efforts will be to create ties between many parties at a mutually acceptable level.”

Finally, when asked how he sees the future of our country, Burak Mavis notes that “even though the conditions seem difficult at the moment, the future of the country lies in the solution of the Cyprus issue on the basis of a bizonal, bicommunal federation. Negotiations must continue regardless of the prevailing political climate. There is a continuing need to implement confidence-building measures.” KTÖS, he underlined, believes that a bi-communal, bi-zonal federation based on political equality can lead to a solution within the parameters of the UN and that the two communities can coexist.

He also points out that the European Union and the Republic of Cyprus have a responsibility to include the Turkish Cypriot community and allow access to social, educational and health issues. “The only way forward is to create ways to build bridges and trust between the two communities.”

Consistent in promoting peace and cooperation between trade unions

Burak Mavis, before assuming the leadership of the Turkish Cypriot teachers’ union KTÖS at the end of May, had served, during the last decade, as the Organizing Secretary and Secretary of Education.

Its aim remains to promote peace, democracy, social justice and equality through the development of education and the collective power of educators and education workers.

He contributed to the development of educational publications, to the cooperation between the Cypriot trade unions that are members of the ETUCE (European Trade Union Committee on Education), to the training of teachers and to the organization of multiple international conferences to promote the culture of peace and democratic education.

Publishes articles with an emphasis on education, politics and history in newspapers, magazines and other forms of print magazines.

He is a member of the Board of Directors of the Historical Dialogue and Research Association.